Stars flock to Honk Kong for Amfar via WWD 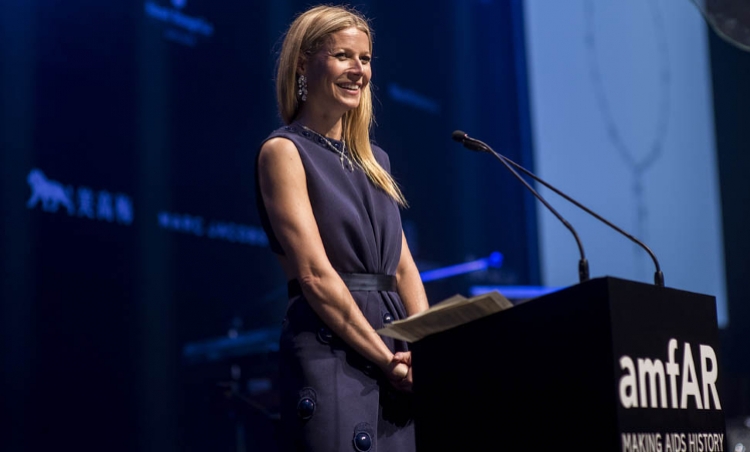 Until recently, Hong Kong didn’t have a great deal of star appeal but a changing of the guard seems to be taking place. A bevy of celebrities touched down in the city this weekend for the first amfAR gala coinciding with the latest edition of Art Basel in Hong Kong. “I think culturally the city has ripened. It’s full of energy and creativity. It’s so international,” said fashion designer Vivienne Tam. “Having amfAR here during Art Basel creates even more excitement.”

On Saturday evening, an entourage of VIPs in limousines pulled up at Shaw Studios in the far-flung New Territories for the AIDS research fundraiser. Joining honorary chair Gwyneth Paltrow were about 700 guests including international and local heavyweights. Paltrow, who was dressed in an elegant navy gown, was met with applause when she introduced the event as “long overdue.”

Paltrow, along with co-chairs Kate Moss and Naomi Campbell all wore Marc Jacobs. “Marc was one of the first designers to ever book me in 1987,” cooed Campbell, wearing a backless burgundy number with nailhead details. “He’s also been someone who’s been a supporter of amfAR I think since it started. Even though he’s not here tonight, he’s here in spirit.”

Asked why the organization decided to host a gala in Hong Kong, amfAR chairman Kenneth Cole stressed that Asia has long been at the forefront of the organization’s agenda. “The whole community just committed to opening their hearts, arms and wallets so we had this comfort level here,” he said. “The night’s been beyond anything we even hoped for. It’s just amazing.”

Campbell echoed a similar sentiment emphasizing her ties with the region. “I’ve been to Hong Kong many times and I like the city. You know my grandma is half Chinese. I feel comfortable here,” she said. “With HIV, we don’t read about it everyday in the news but it’s important that we keep people aware…The more countries it goes to the better.”

Dressed in a black sequined tulle gown with cigarette in hand, Moss fluttered around the room between speeches. At one point she pulled up a chair at Campbell’s table where they posed for a selfie before Paris Hilton sauntered over. Soon, one of their table members arrived with his own bottle of Grey Goose and began pouring vodka into wine glasses.

It wasn’t long before the vivacious auctioneer Simon de Pury caught everyone’s attention with an energetic auction. The star lot that sparked a bidding war was a surprise donation from Leonardo Di Caprio. He offered up a table at his benefit event in St. Tropez this July as well as an invitation to his yacht the next day. While only one space was available, demand was so high that de Pury extended the offer to three additional individuals raking in a total of $1 million. Moss later bit her lip in anticipation as a Mr. Brainwash portrait of herself arrived on the auction block. She offered to autograph the work, which sold for $130,000.

Nearing midnight magpie Robin Thicke got the party started when he belted out a few cover songs before closing with the controversial “Blurred lines.” Revelers then headed into another soundstage for the after party where a DJ called upon “Phat Moss” aka Kate Moss to join him at the decks. In total the event raised more than $4 million.

More in this category: « Entertainment for you Comedic functionality »
back to top