Chanel Takes New York With A Glittering Tribute To Salzburg 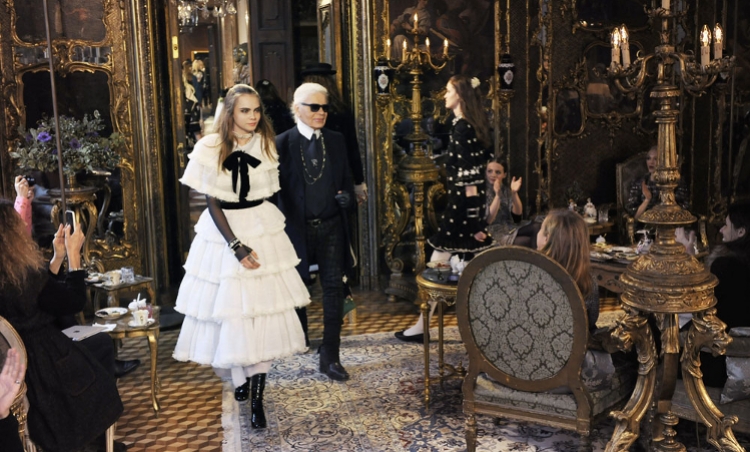 f it’s Tuesday this must be Chanel — in New York City, via Salzburg. And there’s Pharrell, dressed in his signature shorts, now sporting a jaunty bellman’s cap. Perched next to him on an overstuffed Louis XV settee Beyoncé flashes a smile.
If this is confusing, let’s back up.

The evening’s invitation — a glittering Karl Lagerfeld sketch of Salzburg’s Schloss Leopoldskron — was the first clue that Chanel might be bringing their Paris‑Salzburg 2014/15 Métiers d’art collection to New York City. But none of the 650 guests pulling up to the Park Avenue Armory on a rainy March evening could have guessed that just beyond the majestic doors lay a grand suite of 18th century style rooms painted in delicate shades of lilac, burgundy, Wedgwood and gold and lit with enormous crystal chandeliers. Waiters passed champagne and canapés to the crowd. And what a crowd: Beyoncé, Patti Smith, Julianne Moore, Banks, Vanessa Paradis, Lily-Rose Depp, Anna Mouglalis, Dakota Johnson, and Lily Collins. Socialites like Harley Viera-Newton, Laura Love and Alexa Chung lounged on their appointed settees while watching the collection of intricate pieces showcasing the unique craftsmanship of Chanel’s creations — Lemarié feathers, Lesage embroidery, and Causse gloves to name a few.

For the finale, Cara Delevingne and Kendall Jenner appeared in twin confections of black and white tulle trimmed in velvet ribbon and lace. Taking his bow with six-year-old Hudson Kroenig--dressed in lederhosen, of course — Karl then beckoned guests into a wood-paneled coffee house hidden behind a giant bookcase. A special screening of Lagerfeld’s film, “Reincarnation” revealed the inspiration behind Coco Chanel’s iconic tweed jacket: the hotel porter’s jacket she first spied at Salzburg’s Mittersill Hotel. And then, Voilà! Pharrell reappeared on stage dressed in his own version of the Tyrolean-inspired jacket.

“I never could have dreamed of singing this here for you in New York City!” he exclaimed before launching into “Happy” and “Get Lucky.” Before anyone could press “send” on their iPhones, Pharrell called Cara Delevingne up on stage to sing “CC The World,” the song he composed for the film’s soundtrack, a song he said had been inspired by “a slight Viennese waltz.” True to form, even the back up dancers wore pearls.

More in this category: « The pursuit of radiance from within Bazan Blooms In Baby Blueboss Spring/Summer 2015 »
back to top