The biggest, most advanced Falcon yet 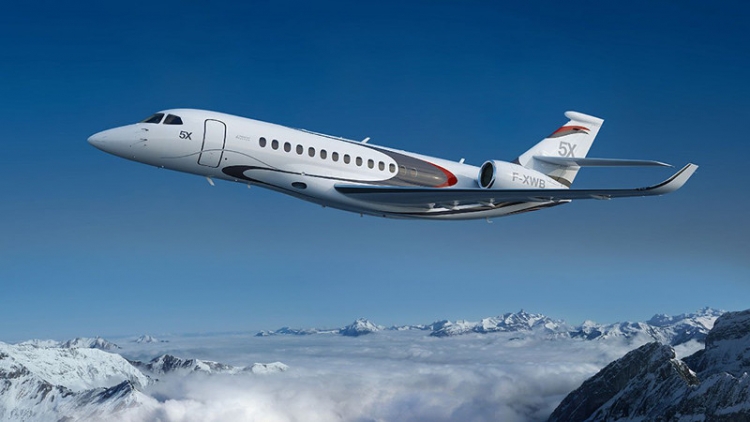 Consider these impressive facts and figures: a six-foot, six-inch cabin height, the tallest in business aviation; a wider cabin than previous Falcons; a top speed
of .90 Mach; a range of 5,200 nautical miles and the short-field capability of much smaller jets.

Yet all this performance and capability is achieved with the lowest fuel consumption in its category. The 5X is as much as 50 percent more efficient on short missions.

The State-of-the-Art Falcon 5X
The Falcon 5X has business aviation’s most advanced fly-by-wire system. The ultra-efficient Silvercrest engines extract maximum power from every precious pound of fuel. The cabin cradles you on eleven-hour flights and allows you to walk off feeling your very best.
The ultimate benefit: a big plane you can use efficiently for almost any mission, short or long.
The Falcon 5X is built to appeal to all your senses, not least your common sense.

The figures
Known for their agility in the air, Falcons are just as maneuverable on the ground where their modest ramp presence means they can find a home in nearly any airport environment. Here is how the 5X measures up.

As seductive as high-speeds may be, part of the value of a Falcon is a wide speed envelope. As with previous Falcon generations, the wing of the 5X is optimized for both high- and low-speed performance. Leading edge slats and trailing edge flaps yield remarkably low takeoff and approach speeds. In fact, typical (Vref) approach speed for the 5X is 105 knots. That’s up to 20 knots slower than most jets with comparable range and near the approach speed of some short-field turboprops.
Low-speed capability equates to greater safety margins on takeoff and landing. It also opens up more airports — very often the ones that are most convenient for you. With a balanced field length of 5,250 feet, the 5X can use more airports than competitors. It can fly farther from them, especially the most challenging fields such as Aspen or London City. Even with a partial fuel load, you’ll be amazed at the small airports you can use, including those with runways of less than 4,000 feet.

Go fast, go far
The Falcon 5X has a maximum range of 5,200 nautical miles at its long-range cruise speed of Mach .80. Choose to fly at normal cruise of Mach .85 and still accomplish long, inter-continental missions with a range of 4,750 nautical miles. For coast-to-coast U.S. travel, or other trips of 3,000 nautical miles or more, you can fly even faster. Top speed is Mach .90.
Once you are up and away, you’ll want to fly fast. Fighter heritage means a fast, tough airplane, and like other Falcons, the 5X has no speed limitations in turbulence. Climb directly to 41,000 feet, which often helps Air Traffic Control provide more direct routings. During typical cruise altitudes of 43,000 to 47,000 on long range missions, you'll often be above the Jetstream in air that is usually silky smooth.

More in this category: « Dassault Aviation Reveals First Falcon 8X Princess Yachts set for another show-stopping display at boot Düsseldorf 201 5 »
back to top