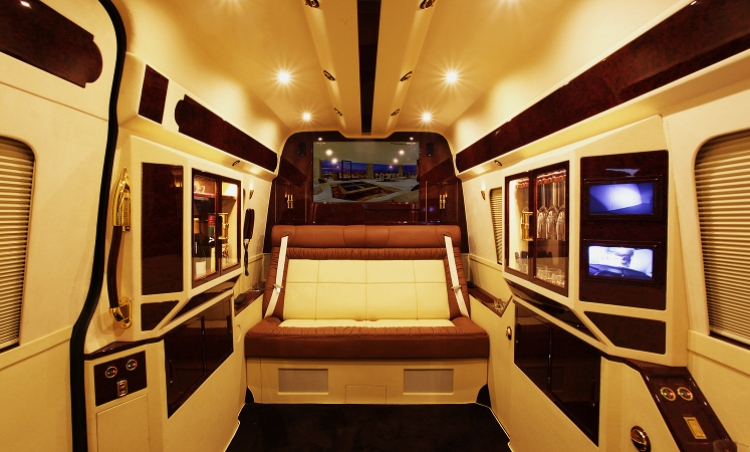 Lexani Motorcars, a boutique luxury conversion company receiving vast international praise, has produced the Concept One Curve—the world's first 2015 Escalade with a built-in 48" 4K Technology Curved Smart TV. Lexani Motorcars is constantly pushing the boundaries of possibility for luxury transportation in everyday vehicles. The Curve is a revisited version of their latest model, the Concept One, with a television upgrade and electronic rear curtains; it is unmatched in its ability to be a premier theater one minute and a five-star mobile office the next.

The curved smart TV—which rests on a proprietary electronic partition—is indeed impressive, but it is just one of the numerous amenities this discreet masterpiece boasts. The Concept One Curve is also equipped with an Apple iPad Air II, 24K gold-plated hardware, a Control4 touch screen management system, airline style tables, TracVision Satellite, security cameras and monitors, a raised ceiling with ambient LED lighting, a Mac Mini computer, video conferencing, and custom power chairs upholstered in the finest European leather. For those who fancy entertainment, this vehicle has all the latest devices under one beautiful roof; for those with productivity as a priority, there is nothing that can't be done with this vehicle's astutely planned office features. The above-mentioned amenities are merely a sample of the options available.

Lexani Motorcars also has something for the security-conscious, specializing in the customization of armored vehicles. They have upfitted Escalades, Navigators, Yukons, Land Cruisers, Sequoias, and Mercedes-Benz Sprinters with stunning results. They succeeded in transforming bulletproof steel-laden vehicles into beautiful, relaxing oases. Lexani Motorcars allows you to enjoy an environment of classic elegance while maintaining modern technology at your fingertips.

The Lexani Brand
Lexani, internationally recognized as the leader in luxury automotive accessories, has maintained said position for almost two decades. Attracting the attention of celebrities and featured in notable publications as the New York Times and Forbes, Lexani has become a world-renowned icon of the automotive industry.

Lexani Motorcars
Lexani Motorcars carries the prestige of the Lexani brand to the luxury executive transport market with unparalleled design, innovation, and quality. Since its inception, Lexani Motorcars has exceeded every expectation, providing vehicles for professional athletes, Hollywood elite, and government officials around the globe.