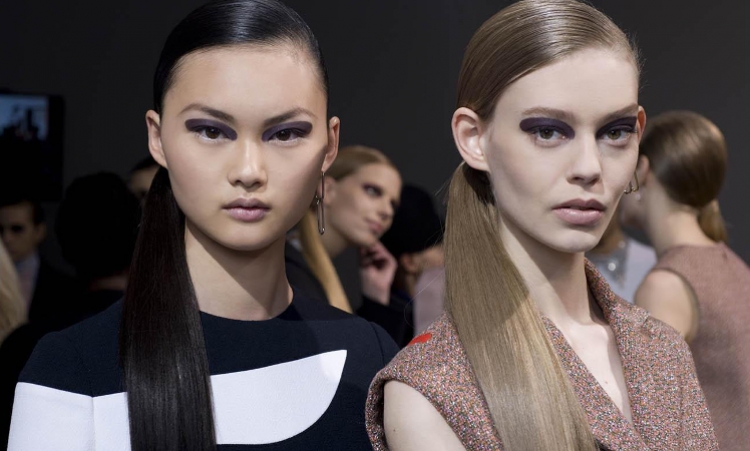 The shadow is cleanly laid down as solid color and defined with a pre-moistened sponge applicator. Eyeshadows in autumnal tones are accentuated by a sweep of eyeliner drawn along the edge of the lid by the beveled nib of a black Diorshow Pro Liner pen, and lashes are sheathed in Diorshow Maximizer , then densified by using blackDiorshow Pro mascara.

In contrast to the intensity lent the eyes, the rest of the face has a natural look. Unified by a fluid foundation, any imperfections located around the eye area are blurred by a few finger taps with theFix it 2-in-1 Prime & Concealer , and as an ultimate burst of light, Diorskin Nude Cosmopolite illuminator is dabbed on the cheekbones. Similarly, the lips, simply dabbed with the Fix it 2-in-1 Prime & Concealer stick, display a discreetly gentle color.
A symbol of this instinctive and liberated approach to beauty, each hand boasts nails of different shades, creating unique and eclectic combinations: the black of Black Out, the metallic blue of Darling Blue, or the grayed green of Metropolis and Cosmopolite purplish red,all four from the Cosmopolite collection, along with the intense bordeaux of the legendary Nuit 1947. This set of tones echoes the asymmetry of the outfits designed by Raf Simons and the hair pulled into a long ponytail over one shoulder.

More in this category: « Luxury cosmetics Shiseido Innovative Givenchy Mascara »
back to top